DNA is the prime genetic molecule carrying all the hereditary information within chromosomes.

The most important feature of DNA is that it is usually composed of two polynucleotide chains twisted around each other in the form of right handed double helix. These two strands are complementary to each other.

These macro molecule structures are composed of regular repeating polymers formed from nucleotides. These are the basic building blocks of nucleic acids. The nucleotides are derived from nucleosides that are composed of two elements; a five-membered pentose sugar, known as 2′-deoxyribose and a nitrogenous base. The sugar is called 2′-deoxyribose because there is no hydroxyl at position 2′. (just two hydrogen). The carbon atom of the sugar are designated ‘prime’ (1′,2′,3′,…5′) to distinguish them from the carbon atoms of nitrogenous bases.

A nucleotide or nucleoside phosphate is fromed by the attachment of a phosphate to the 5′ position of a nucloside by an ester linkage. Such nuclotides can be joined together by the formation of a second ester bond by reaction between the terminal phosphate group of one nucleotide and the 3′ hydroxyl of another, thus generating a 5′ to 3′ phophodiester bond between adjacent sugars; this process can be repeated indefinitely to give long polynucleotide molecule. 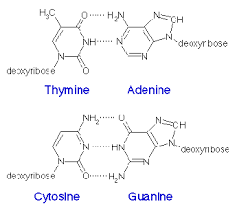 These bases exists in two alternative tautomeric states. The nitrogen atoms attached to the purines and pyrimidine rings are in amino form in the predominant state and only rarely assume the imino configuration. Likewise, the oxygen atoms attached to the guanine and thymine normally have the keto form and only rarely take on the enol configuration.

DNA double helix is also stabilized by the stacking interactions between the bases. The bases are flat, relatively insoluble molecules, and they stack above each other roughly perpendicular to direction of double helix. Electron cloud interaction (Pi-Pi) between bases in the helical stacks contribute significantly to the stability of the double helix.

Hydrogen bonding is also important for the specificity of the base pairing. Suppose we tried to pair an Adenine with a Cytosine, then they have a hydrogen acceptor (N3 of cytosine) lying opposite a H-Bond acceptor (N1 of Adenine) with no room to put a water molecule in between to satisfy the two acceptors. And like wise two hydrogen bond donor opposite each other. Thus an A:C base pair is unstable in forming H-Bond.